I was born and raised in Wyoming, but now I live in California.  I married a sexy man who grows tomatoes, but doesn’t eat them.  I love tomatoes.  Raising children is the business I am in now, but before I became a mother I taught elementary school.  I have four wonderful children who suggested I put my characters in a game of M.A.S.H. to see how the whole thing ends.  Spoiler Alert:  Jeremy marries Sarah, they live in a shack with 25 kids, and they drive a garbage truck.

I began writing my first novel, Under Western Skies in September of 2015.  I’ve had such a fun time learning about the writing world.  When I first started this process, I thought it would just take a month or so to write my first draft.  I knew it would be perfect.  I would tie it up in a pretty ribbon, place it into a nice white box and mail it off to a publisher.  Within a week my book would be flying off the shelves.  Then I learned it wasn’t 1912 and first drafts are not that good.

I had no idea there were literary agents, that publishers rarely accept slush, and that it’s hard to get published if you haven’t already published.  But, I’ve kept at it.  I’ve immersed myself in writing blogs and videos, entered a few short story competitions, and even attended a novel boot camp with Ellen Brock.  I started this blog, joined Twitter, created accounts on Instagram, Pinterest and Facebook.  I even went to my first writers conference.  It has been a TON of work, but I am still having fun.  My house is a wreck, but eh.

My work is finally coming together.  It isn’t perfect, but every time I print it out, I wrap it in a pretty bow. 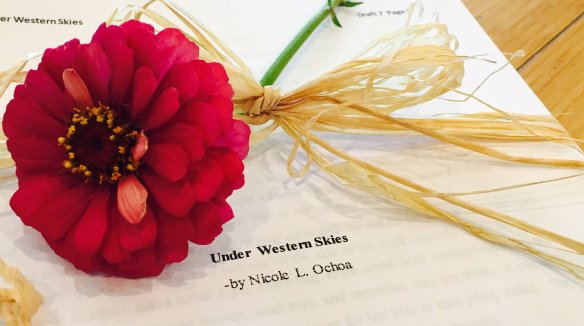 On this blog I post my journey as a writer.  I will win some, lose some and learn a whole bunch in-between.  Thank you for the time you have taken to stop by, and I appreciate you giving my words a chance.  I hope one day my story will make you laugh, cry, and maybe even fall in love.